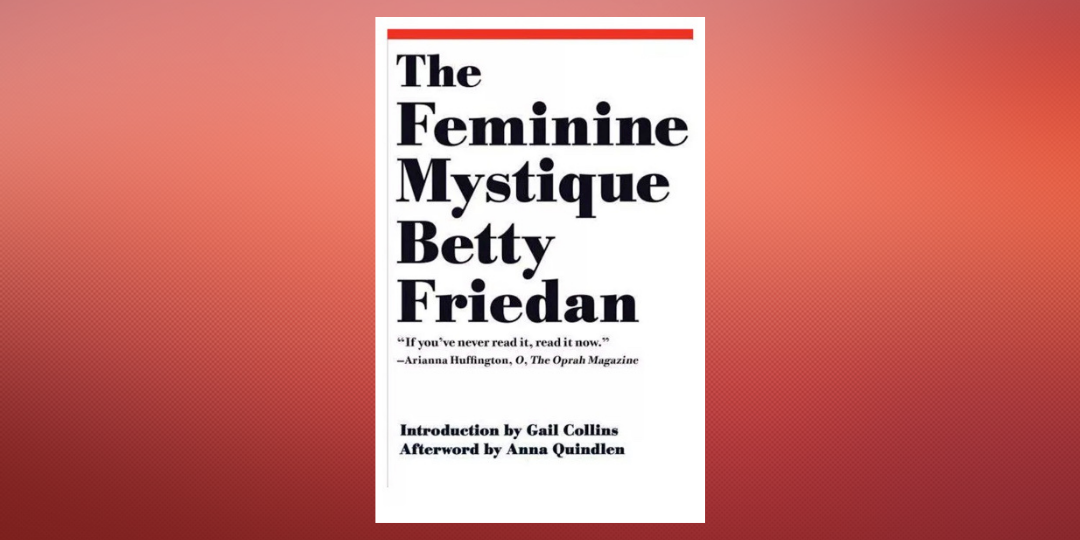 “Why read The Feminine Mystique today?  In short, knowing where we came from ensures that we end up where we want – and need – to go.  Yes, parts of the Feminine Mystique are dated after 50 years, but within its pages, we can still appreciate that Friedan gave name and voice to the deep dissatisfaction with the pigeon hole women in the 1950s were crammed down into.  Her book is riddled with prophecy, both intended and unintended, still relevant today … the fallacy that a woman can ‘have it all,’ the obvious exclusion of the black female experience in Friedan’s discussion of feminism, the danger of our current ‘courage culture’ and what that all means in an increasingly diverse workplace and world.

We must be able to take up our catalyzing sisters and thinkers of the past, including Friedan, courageously discuss their work, its value, and its flaws, and then use that to propel the modern feminist movement beyond “MeToo” and hashtags, into lasting institutional change that elevates, celebrates, and supports the value of all women, Black, Brown, Trans, Asian … all of us … in all places and spaces.  We will engage this book with reference to more modern thinkers like bell hooks, to keep the movement moving ever forward.”

About Maggie: Margaret “Maggie” Daun is the Chief Corporation Counsel for Milwaukee County.  Serving in that capacity since 2017, Maggie supervises a staff of over 25 professionals.  Together, the Office of Corporation Counsel provides civil legal services to all departments and elected officials in Milwaukee County, including the Sheriff’s Office, General Mitchell International Airport, the County’s behavioral health hospital, the County parks, its transportation system, the County Zoo, its jail and house of correction, the courts, human resources, the pension system.  They also advise and assist with negotiation and drafting economic development transactions, general public policy matters, operational policies, legislation.  Finally, the OCC defends and prosecutes all civil matters involving Milwaukee County and provides various community-facing legal services including guardianship and psychological commitment proceedings.

In March 2018, Ms. Daun filed suit against opioid manufacturers and distributors on behalf of Milwaukee County, and in doing so, helped to lead a wave of local governments nationwide pursuing similar lawsuits. In the 187-page complaint brought against 13 entities, the County seeks injunctive relief, as well as millions in compensatory damages.  This case led to a first-in-state-history $71 million settlement with opioid distributors for Milwaukee County, announced in December 2021.  These moneys, as well as future settlements with manufacturers, pharmacies, the Sackler Family, and its global consultant, McKinsey & Co. in coming years, will save countless lives in Milwaukee County and beyond.

Prior to joining the County, Ms. Daun worked the City of Milwaukee where she was first an Assistant City Attorney and then ran the City’s nearly $2 billion award-winning deferred compensation plan.  Before that, she worked for two global law firms, White & Case LLP in New York City and Winston & Strawn LLP in Chicago, where she specialized in the defense of securities fraud claims and other complex class action and commercial litigation matters.  She also maintains a private legal practice, where she advises small to medium-sized businesses in Wisconsin, Illinois, Connecticut, Massachusetts, Georgia, Ohio, and New York.

Outside of her work as an attorney, Ms. Daun is a frequently sought-after speaker on a wide variety of topics, including managing organizational change, the opioid epidemic, finance and economics, leadership, pensions and retirement planning, diversity and inclusion, and career planning, among other issues.  She has appeared on the nationally syndicated television program Fox & Friends, as well as nationally syndicated and local television and radio programs on a wide variety of topics.  For over two years, she also hosted a weekly Milwaukee- and Madison-broadcasted talk radio show, “Daun of the Resistance,” on 101.7 FM and 92.7 FM WRRD, respectively, where she provided detailed legal explanations of current events and public policy issues in a format that aims to entertain, educate, and elicit informed debate.  In 2020, she was awarded the Wisconsin Broadcaster Association’s Large Market First Place Award for Best Interview.

ABOUT THE BOOK THE FEMININE MYSTIQUE

The book that changed the consciousness of a country―and the world.

Landmark, groundbreaking, classic―these adjectives barely describe the earthshaking and long-lasting effects of Betty Friedan’s The Feminine Mystique. This is the book that defined “the problem that has no name,” that launched the Second Wave of the feminist movement, and has been awakening women and men with its insights into social relations, which still remain fresh, ever since. A national bestseller, with over 1 million copies sold.

About the Author: Betty Friedan (1921–2006), a transformational leader of the women’s movement, founded the National Organization for Women (NOW) and authored many works, including The Second Stage, The Fountain of Age, and Life So Far.

In an effort to create a safe environment, the Women’s Fund of Greater Milwaukee adopted a COVID policythat requires all attendees either be fully vaccinated against COVID-19 or have a recent negative COVID-19 test.  Regardless of vaccination status, if you are experiencing symptoms or have had recent contact with someone who has COVID or COVID symptoms, please refrain from attending events/meetings in person.

If your status regarding COVID changes ahead of an event/meeting, please contact Lisa Attonito, Executive Director, to discuss participation options.  Lattonito@womensfundmke.org or 414-290-7350.